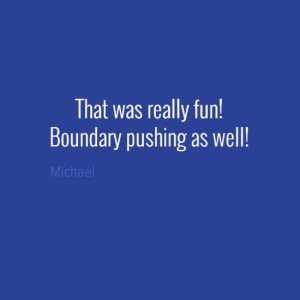 What do you get when you have an idea about bringing one’s culture into improv and an opportunity to do so for not more than 3.5 minutes?

Here is how I took advantage of that opportunity – Yo, Is this Racist or Not Racist? (aka YiTRoNR?)– That’s what I came up with. 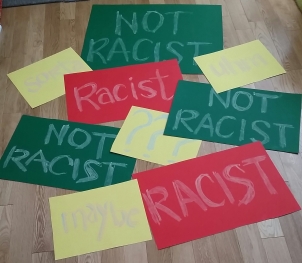 –  and admittedly, I did not follow my own rules toward the end* by doing more than three lines,  however, as an experiment, I was glad to get it out there with the help of friends.

And while YiTRoNR was not quite bringing one’s culture into improv, it was in the spectrum and range of exploring and expressing race – social, cultural, and familial – as an improviser and an audience member.

I have been brewing bicultural improv since earlier this year. Simply stated, my early thoughts were about creating a team that is predominantly composed of people of color, with bicultural experiences from which to draw.

In June, four un-panelists (Chang, Bell, Rodriguez, Mansbach) at a June book fair festival unknowingly reignited my interest in bicultural improv. Since then, my ideas of bicultural improv have been evolving into what I have been calling Colorized Improv, a nod to Jeff Chang’s Who We Be: The Colorization of America for the inspiration.

I have exchanged ideas with friends and colleagues not only in the SF Bay Area but also in Southern California and Chicago. To date, I am collaborating with Radhika Rao on creating and defining the general framework and elements, experimenting with improv formats, and conceiving workshop ideas and performance pieces. (More to come) 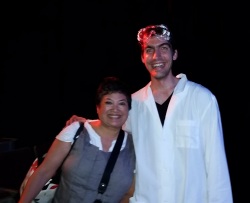 An Opportunity to Experiment

In late September/early October, there was an opportunity to “showcase” anything for 3.5 minutes. This opportunity? The October installation of The Laboratory, hosted by Salvatore (Sal) Testa. The Laboratory was described as –

The Laboratory is an experimental improv show where 18 teams get 3.5 minutes to do whatever they want with no restrictions. It is going to be weird, and that’s going to be great. A set where everyone is a cat? Possibly. A scene where everyone says one collective sentence, one word at a time? We can only hope. A 3.5 minute of dating game? Probably. This will probably happen.

(By the way, time permitting, Sal was very generous by letting additional teams (including those  who missed signing up or had an idea on the spot) to perform. Great host and producer!)

Raw Ingredients to Formulate The Idea 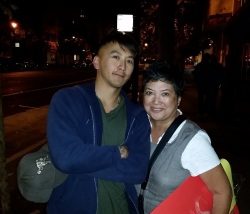 The Laboratory triggered in me the idea to create something that may be under the umbrella of the evolving Colorized Improv. I touched base friend Johnathan, who has shared similar ideas about having more underrepresented improv players, as well as scenes with cultural context. I also shared the idea with friends in Guam Improv. Here are the “raw ingredients” I worked with for creating YiTRoNR.

Improv warm-up staple – Using the improv warm-up exercise – Three Lines Scene – perform scenes that clearly are and are not racist, and perhaps scenes that are not so clearly one way or the other (arguably).

Identify / Flip cards – Guam team member, Ashley, suggested poster boards to call out whether a scene was racist or not racist. From this creative idea came other ideas from other friends for using flip cards to call out racist/not racist scenes: having the improviser self-identify; having one person serve as a kind of referee; having the audience identify; or some combination of the above.

Optional audience participation – Given the Laboratory format and surprise element, one of my friends suggested that audience members could verbally state racist/not racist and/or could use flip cards to do so. Other ideas included having and audience volunteer take part in the three lines scene or having a whistle blown for racist scenes.

Post-Show Food for thought – With 3.5 minutes, I wanted to experiment with improvisers and the audience. This included several ideas: improvisers purposely choosing to create characters or scene initiations that could be identified as racist, not racist, microaggressions, or implicit bias; improvisers performing that are predominantly people of color; audience members reacting to scene creations; and improvisers and audience members considering culture in improv. 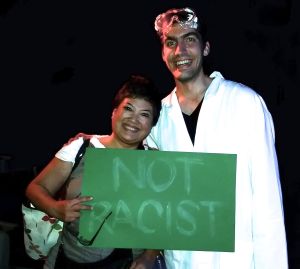 Serving up the Experiment – Yo, Is This Racist or Not Racist?

Here is the food-for-thought.

And an award-worthy move at the end? Michael ripping in half one of the racist/not racist poster board!

If you are chewing on this, what ingredients would you keep? What would you change? What ideas come to mind for you – improviser and non-improviser – when watching this?

* The closing scene (beyond three lines)
was from a previously improvised scene
between Johnathan and me. 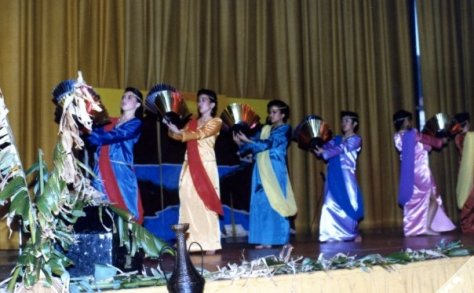 Since I have been sharing thoughts related to diversity, here I share this brief account (or maybe a short story?) of a little life moment back in 2007.

i was less than 7 feet away from him in his less than 500 sq ft studio apartment. it was midnight. he slowly paced back and forth in front of me, justifying why he asked his neighbor to refrain from talking loudly. i agreed. it was disrespectful of his neighbor. a nightly event, his neighbor was outside talking on the telephone. i was inside sitting on one of three chairs – four chairs, if i counted the ottoman. he stood between his doorway and me. this would be the first and last time i visited his apartment.

i was certain i heard him say “… oh. uh … no offense. …” who might he have offended? his door was closed. his neighbor did not hear him.

“… oh. uh … no offense. …” he waved with what i later understood to be a preemptive, pacifying, left hand gesture toward me, while he paced back and forth and continued to talk. when he exclaimed about the need for foreigners to adapt and assimilate to the american culture, on occasion, he looked over his shoulder at me.

he really did say “… oh. uh … no offense. you know. and …” was i not to take offense? and his hand gesture? i knew i was american – filipino-american. he knew i was born in the united states. certainly there was no reason for me to take offense. i knew i was not a foreigner. would a foreigner, however he defined one, be offended by his statements? it’s simply bad manners to be disruptive at midnight.

he qualified his statements about adapting and assimilating. his context seemed to support a credible position, to explain the reasons behind his statements, to assure some rational thought. he was clear – specific, i thought. in fact, i believed he had valid perspectives. at least, for several minutes, he sounded educated and informed.

born in the united states with a father who always extolled the virtues and opportunities of being an american citizen – i voted. my parents raised their family as bicultural, with the american slant more prominent. he? he was a european mix. he was american. he, too, was not a foreigner.

“oh? right. uhm…” with an awkward silence, his pacing stopped. then he faced me, shoulders squared-off, about 5 feet from me. “well …”

i interrupted him,
“you understand that i’m not a foreigner. right?”
more awkward silence as he stood still.

“well, you know what i mean? …” he stepped back a few feet. his pacing, rationalizing, and explaining resumed. and that was when i realized i knew what ignorant meant.

i interrupted his explanations, for the last time.
“i hear what you think you mean. i hear. i understand. …”
i began to explain what i understood. i believed i would convince him of what he did not understand. then with my voice trailing off, suddenly, i realized my disappointment. i knew i was not a foreigner. he did not. i no longer commented. he had his stage. it was his home. this was his soliloquy. i was his audience, very eager to leave his chair for the first and last time.

while he spoke again, i began to realize that i was someone else in his eyes, in his mind, and perhaps in his heart. my “looking different” and “being different” from him, which he often expressed as part of his strong attraction to me, afforded something else.

often he would say, “your eyes are different. you’re cute. your skin is different. you have a different look than me, which i find sensual. you grew up differently. look how small you are. i know you are more than asian. i like that your dad raised you american.” what i had understood to be observations and compliments began to have different meanings.

i might simply be that someone to adapt and assimilate to standards he held, and until then, he might consider my actions, convictions, values, and beliefs as foreign to him – not to be shared with him. i – not someone to be understood by him, not someone of equal value to him. he – not someone who respected me, not the someone i believed i knew. that night, he became my foreigner. no offense. 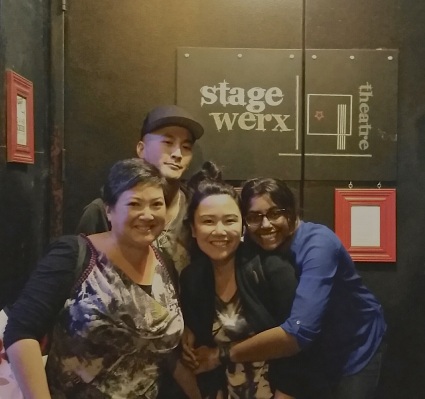 It doesn’t even occur to me …
– an observation

Last Friday evening, September 25, four of us – Johnathan, Amalia, Mithra, and I met to – “…  talk about cultural diversity in improv” – a bit of a spur-of-the-moment Friday night hangout sparked by my friend, Mithra (also Guam improv team member). She called this hangout a Diversity Experiment.

NEXT STEP: Mithra is taking the lead in providing a regular meeting time and place, so stay tuned.

There were four of us; several other friends (unable to attend the Friday hangout) expressed interest in this topic and in meeting up in the future – which will happen. Three reasons for why I joined this hangout include seeing how this would contribute to my evolving thoughts on and creating of colorized improv, learning others’ perspectives, and supporting my friend’s interests.

About this post. This post is an overview of a few topics, rather than specific details, that we touched upon about our personal experience (e.g., observations, opinions, ideas) – briefly or at length – during the evening.

Each of us shared and exchanged our perspectives on the following, which Mithra posed as the initial landscape of our discussion –

– and our landscape of our discussion broadened to other areas and deepened in the initial topics posed.

As a Member of a Diverse Community 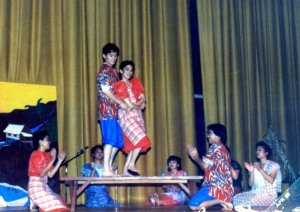 With regards to our own self-identity and diversity, we shared the following:

For the most part, we focused on our cultural and ethnic diversity. Other topics of diversity – gender, age, education, religious, and race – also came up. Part of this conversation contributed to and informed our conversation about what diversity means to each of us in our improv community(ies).

With regards to our improv performances, classes, and workshops, we shared the following: 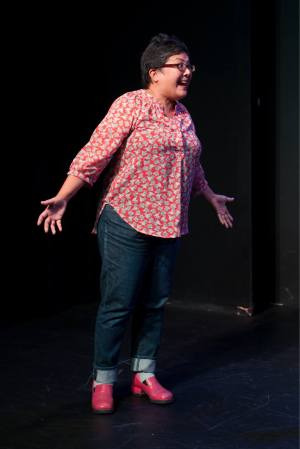 I have to remind myself before a set that I have the choice to create characters and settings with a cultural context.
– (me)

We also talked about some of the nitty-gritty of improv scene work – creating characters, initiating scenes, defining environments, having a point of view, etc. And as mentioned about my interest, I shared about my evolving perspective of colorized improv.

One of our shared ah-ha moments is that we all agreed that as part of our improv curriculum, we did not have an explicit class  or exercise specific to engaging cultural diversity. While each of us have made such choices in our own work, we talked about different ways this can be part of our play and self-training.

For the Improv Community 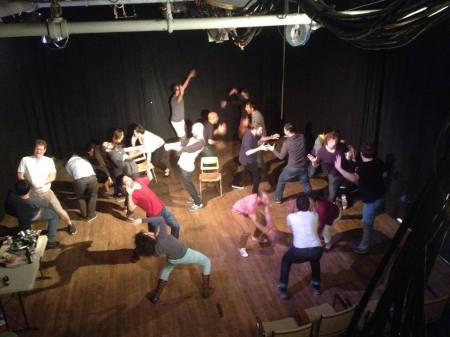 We acknowledged there are both top-down and bottom-up initiatives that can be pursued. While an organization or theater may pursue diversity issues, our discussions were more specific to our role as improvisors and our growing as an improvisor to include diversity – in our own work, among our communities, etc.

What are your thoughts about this initial, informal Diversity Experiment hangout? What do you relate to or not relate to?

Join 546 other followers
Follow an improvised life (dot) me on WordPress.com