Last week Tuesday, the third time was a charm. Yes, after our second win, Guam garnered our third win.

“We” are the all women improv troupe, Guam (on Facebook). Our win? We emerged from the weekly San Francisco THUNDERDOME Cage Match (on Facebook), produced by James Roop. Our challengers? The dapper dressers, Fools of Mercury (on Facebook, “… a San Francisco-based improv group consisting of Nathan Emley, Rico Roque, and Andy Schweig).

THUNDERDOME, as described by host Endgames Improv (on Twitter, web), is as follows –

“Two teams enter, ONLY ONE SURVIVES! THUNDERDOME is the weekly cage match style show through Endgames Improv Theater. Every Tuesday at 9 pm two teams enter the THUNDERDOME and improvise for the audience’s laughter and adulation.

The winner receives glory, fame, wealth, and a high five. The loser gets a lifetime supply of shame, embarrassment, and a disappointed text from their mother. The best part: the audience decides the winner! Come judge some people every Tuesday at 9 pm! $5!”

GUAM closing out our set 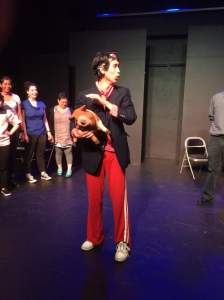 Host Patrick Wu during the “Who shall emerge in tact?” moment

It was a fun night sharing THUNDERDOME with dapper dressers Fools of Mercury.

Our Next Thunderdome Challenger: The Deschanel Sisters

We look forward to our next Thunderdome with The Deschanel Sisters – a San Francisco Bay Area based improv duo consisting of Doug Higgins and Emily Tsay.

The Deschanel Sisters, L to R: Doug, Emily (at the Duo Showcase at The Dark Room, 2014 October 2)

See you Tuesday, September 8, 9:00-10:00
Tickets at the door ($5 or free for current Endgames Improv students)
Tickets in advance at Eventbrite OVER HERE.

2 thoughts on “Thunderdome | guam, third time was a charm”